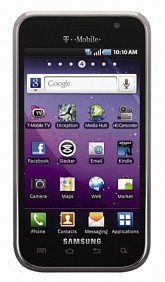 T-Mobile also announced the expansion of America's largest 4G network into more than 100 major metropolitan areas, reaching more than 200 million people nationwide. In addition to the expanding its 4G footprint, T-Mobile also has aggressive plans to double the speed of its Red 4G in 2011, and the company expects that 140 million Americans in 25 major metropolitan areas will have access to these increased 4G speeds by midyear.

"The Galaxy S 4G pushes the envelope by reaping the benefits of our network's unprecedented speeds and by offering groundbreaking entertainment experiences," said Andrew Sherrard, senior vice president, product management, T-Mobile USA. "We are excited to continue to expand our portfolio of 4G devices that enable our customers to have access to unique and compelling features and an optimal 4G experience."

Through the delivery of faster speeds comes an enhanced experience when viewing video entertainment over the Web using services such as YouTube. In addition T-Mobile TV, a pre-loaded application, offers consumers access to live and on-demand mobile HD TV on T-Mobile’s 4G network, including free programming from select stations like ABC News NOW, FOX Sports, PBS Kids and Azteca America.

The Galaxy S 4G's blazing-fast speeds will make sharing memories via e-mail, social networks or video quick and easy. For example, the pre-loaded T-Mobile Video Chat application powered by Qik enables customers to share any moment with loved ones virtually whenever and wherever they want through T-Mobile's network or Wi-Fi. Using either the front-facing or the rear camera, which features a 720p HD camcorder, paired with Video Chat allows customers to hold video conversations with friends and family who have a compatible mobile device.

Featured as a pre-installed application, doubleTwist® with AirSync™ provides customers with a useful and easy way to auto-sync and back up photos, HD videos and music to and from their home computer. With a Wi-Fi connection, customers can easily sync their media wirelessly and at no additional cost. The doubleTwist Player lets customers enjoy their favorite tunes and videos directly from their phone while on the go. The Galaxy S 4G also comes preloaded with Slacker Radio, offering music fans more than 130 genre stations and ability to create their own custom stations for free.

With a slim and sleek design, the Galaxy S 4G's 4-inch Super AMOLED touch screen display gives customers a vivid, sharp viewing experience, whether consumers choose to watch a movie or read a book or newspaper with the preloaded Kindle for Android application while on the go. Powered by Android™ 2.2, the Galaxy S 4G is equipped with a speedy Samsung 1GHz Cortex A8 Hummingbird Application Processor, an ST-Ericsson M5720 HSPA+ 4G modem to enable theoretical peak downloads of up to 21 Mbps, a 5 megapixel camera, a preinstalled 16GB microSD memory card, and a 1650 mAh lithium ion battery.

The Galaxy S 4G is expected to be available to T-Mobile customers in February. Customers can visit http://galaxy-s.t-mobile.com/4G para más información.

Beginning today, T-Mobile’s network will also be delivering 4G speeds to Albany, Augusta, Columbus and Macon, Ga., and Chattanooga, Tenn., in the South region as well as in Champaign, Ill.; Lansing, Mich.; and Rochester, Minn., in the Midwest.

ACADEMY AWARD® is a registered trademark of the Academy of Motion Picture Arts and Sciences.

3 Mobile HD TV can deliver a bit rate of 800kbps and 16:9 resolution; the bit rate and resolution experienced will vary based on many factors, e.g., programming, network connection and device.