The Un-carrier surpasses $40B in total revenues and $30B in service revenues, reports 5.7M net customer additions in FY 17

Record Financial Performance in FY 2017 Across the Board (all percentages year-over-year):

BELLEVUE, Wash. – February 8, 2018 – T-Mobile US, Inc. (NASDAQ: TMUS) reported record revenues and net income in Q4 and its best ever Q4 Adjusted EBITDA. This has resulted in record full-year 2017 results across the board and shows that the Un-carrier continues to outperform the industry in both customer and financial growth metrics.

It's been five years since T-Mobile launched Un-carrier by declaring war on the wireless industry status quo in an effort to change industry practices on behalf of consumers. The industry was stupid, broken, arrogant and treated customers like second class citizens. Five years later, it's clear that the Un-carrier movement has ushered in an era of change. Customers have responded in droves. Over the past five years, T-Mobile's reported customer base has increased by more than 39 million in total - more than doubling in size.

This trend continued in 2017. For the fourth year in a row, T-Mobile added more than 5 million total customers and captured a majority of the industry's postpaid phone growth by adding 2.8 million branded postpaid phone customers in 2017. On top of that, T-Mobile is the only company in wireless consistently growing service revenues and reported the best financial results in the company's history for 2017. In 2017, T-Mobile completed its fourth year of growing service revenues, recording 8% growth in 2017 as the competition continued to show declines. The Un-carrier revolution shows no signs of slowing down.

"Wow - what a way to cap off 2017! Record financial results across the board and over 5 million customers added for the fourth year in a row," said John Legere, President and CEO of T-Mobile. "We made incredible progress in 2017 building out our network and retail footprint to set ourselves up for future growth. Our business is clearly firing on all cylinders and our strong guidance for 2018 shows that we have no plans of letting up!"

Record Financial Performance in FY 2017 Across the Board

T-Mobile's record full-year financial performance in 2017 proves that taking care of customers is also good for shareholders. The Company continues to successfully translate customer growth into industry-leading revenue and cash flow growth. The outlook for 2018 and beyond reveals a continuation of this winning formula.

T-Mobile delivers superior value over the competition, and customers continue to respond by switching to the Un-carrier. Customers are loving Un-carrier benefits such as Netflix On Us and simple rate plans like T-Mobile ONE with taxes and fees included. In 2017, more than 5 million customers joined T-Mobile for the 4th year in a row - all thanks to consumer-friendly offers and an Un-carrier philosophy that puts customers first.

T-Mobile's network continues to be faster and more technologically advanced than our competition, and that trend will only continue as we clear and deploy new spectrum, densify our network, and lay the groundwork for 5G. We have been the fastest network in America in both download and upload speeds for the past 16 quarters and this quarter, we were the first U.S. carrier to exceed 30 Mbps average download speed with 31.6 Mbps. We will build on our speed advantage, while extending our coverage even further through the accelerated 600 MHz buildout.

T-Mobile's network is not only earning accolades from customers but also from OpenSignal, the global standard for measuring consumers' real-world mobile network experiences. In the most recent report, OpenSignal named T-Mobile as the winner in five categories, including mobile data speed and LTE signal availability.

We continue to make investments to expand and improve our network and distribution footprint including:

We expect that the TCJA will be very beneficial for us, both through lower tax rates, as well as the immediate expensing of capital expenditures for five years. Our effective tax rate is estimated to be 24% to 25% for 2018. As a result of the TCJA, we do not expect to be a material cash tax payer until 2024, compared to 2020 previously. We expect a positive impact on net cash taxes paid of $6.5 to $7.0 billion from 2020 to 2027. Additionally, we do not anticipate any permanent interest expense disallowance in the future.

From the inception of our Stock Repurchase Program through February 5, 2018, we repurchased approximately 12.3 million shares at an average price per share of $63.68 for a total purchase price of approximately $783 million.

We also understand that Deutsche Telekom AG, our majority stockholder, or its affiliates, is considering plans to purchase additional shares of our common stock. Such purchases would likely take place through December 31, 2018, all in accordance with the rules of the Securities and Exchange Commission and other applicable legal requirements.

T-Mobile is not able to forecast net income on a forward-looking basis without unreasonable efforts due to the high variability and difficulty in predicting certain items that affect GAAP net income including, but not limited to, income tax expense, stock based compensation expense and interest expense. El EBITDA ajustado no debe usarse para predecir los ingresos netos ya que la diferencia entre las dos medidas es variable. Guidance is stated in terms of GAAP as of December 31, 2017, and does not include impacts from the adoption of ASU 2014-09, "Revenue from Contracts with Customers (Topic 606)" and ASU 2016-15, "Statement of Cash Flows (Topic 230): Classification of Certain Cash Receipts and Cash Payments."

Adjusted EBITDA is expected to be between $11.3 and $11.7 billion. Our Adjusted EBITDA target includes leasing revenues of $0.6 - $0.7 billion. Including the estimated impact of the new revenue standard, Adjusted EBITDA will increase by an additional $0.2 - $0.5 billion for a total range of $11.5 - $12.2 billion.

Cash purchases of property and equipment, excluding capitalized interest, are expected to be between $4.9 and $5.3 billion. This includes expenditures for 5G deployment.

In 2018, we expect the following impacts from the adoption of the new revenue accounting standard:

We will provide additional disclosures comparing results to previous GAAP in our 2018 consolidated financial statements. Please see our Annual Report on Form 10-K filed on February 8, 2018 for more information.

For more details on T-Mobile’s Q4 and full year 2017 financial results, including the Investor Factbook with detailed financial tables and reconciliations of certain historical non-GAAP measures disclosed in this release to the most comparable measures under GAAP, please visit T-Mobile US, Inc.'s Investor Relations website at http://investor.T-Mobile.com.

Text: Send a text message to 313131, enter the keyword TMUS followed by a space

The earnings call will be broadcast live via our Investor Relations website at http://investor.t-mobile.com. A replay of the earnings call will be available for two weeks starting shortly after the call concludes and can be accessed by dialing 888-203-1112 (toll free) or 719-457-0820 (international). The passcode required to listen to the replay is 3857723.

Declaraciones a futuro
Este comunicado de prensa incluye "declaraciones a futuro" a los efectos de las leyes de valores federales de los EE. UU. Toda declaración en la presente que no constituya una declaración de hechos históricos, incluyendo declaraciones por parte de T-Mobile en relación con planes, perspectivas, convicciones, guías, estrategia, apertura de tiendas, despliegue de espectro y modernización esperada de la red y otros avances, se consideran declaraciones a futuro. En general, las declaraciones a futuro se caracterizan por contener palabras como "anticipar", "esperar", "sugerir", "planear", "proyectar", "creer", "tener la intención", "calcular", "propósito", "perspectivas", "tal vez", "quizás", "pronosticar", y expresiones similares. Las declaraciones a futuro consideran únicamente el momento en el que se hacen, se basan en conjeturas y expectativas del momento, e implican ciertos riesgos e inseguridades. Important factors that could affect future results and cause those results to differ materially from those expressed in the forward-looking statements include, among others, the following: adverse economic or political conditions in the U.S. and international markets; competition, industry consolidation, and changes in the market for wireless services could negatively affect our ability to attract and retain customers; the effects of any future merger, investment, or acquisition involving us, as well as the effects of mergers, investments, or acquisitions in the technology, media and telecommunications industry; challenges in implementing our business strategies or funding our operations, including payment for additional spectrum or network upgrades; the possibility that we may be unable to renew our spectrum licenses on attractive terms or acquire new spectrum licenses at reasonable costs and terms; difficulties in managing growth in wireless data services, including network quality; material changes in available technology and the effects of such changes, including product substitutions and deployment costs and performance; the timing, scope and financial impact of our deployment of advanced network and business technologies; the impact on our networks and business from major technology equipment failures; breaches of our and/or our third party vendors' networks, information technology and data security; natural disasters, terrorist attacks or similar incidents; unfavorable outcomes of existing or future litigation; any changes in the regulatory environments in which we operate, including any increase in restrictions on the ability to operate our networks; any disruption or failure of our third parties' or key suppliers' provisioning of products or services; material adverse changes in labor matters, including labor campaigns, negotiations or additional organizing activity, and any resulting financial, operational and/or reputational impact; the ability to make payments on our debt or to repay our existing indebtedness when due or to comply with the covenants contained therein; adverse change in the ratings of our debt securities or adverse conditions in the credit markets; changes in accounting assumptions that regulatory agencies, including the Securities and Exchange Commission ("SEC"), may require, which could result in an impact on earnings; and changes in tax laws, regulations and existing standards and the resolution of disputes with any taxing jurisdictions; the possibility that the reset process under our trademark license with Deutsche Telekom AG results in changes to the royalty rates for our trademarks; and other risks described in our filings with the SEC. You should not place undue reliance on these forward-looking statements. No actualizaremos las declaraciones a futuro, ya sea como resultado de información nueva, eventos futuros u otro caso, a menos que así lo requiera la ley.

T-Mobile US, Inc.
Effect of Change in Accounting Principle
(Unaudited)

Effective January 1, 2017, we began presenting the amortization of the imputed discount on our Equipment Installment Plan ("EIP") receivables as Other revenue on our Condensed Consolidated Statements of Comprehensive Income. Prior to the change, the imputed interest was presented as Interest income. We made this change to provide a better representation of amounts earned from our major ongoing operations, align with industry practice and enhance comparability. We have applied this change in accounting principle retrospectively and presented the effect of the change in the table below. For additional information, see Note 1 - Summary of Significant Accounting Policies of the Notes to the Consolidated Financial Statements included in Part II, Item 8 of our Annual Report on Form 10-K filed on or about February 8, 2018. 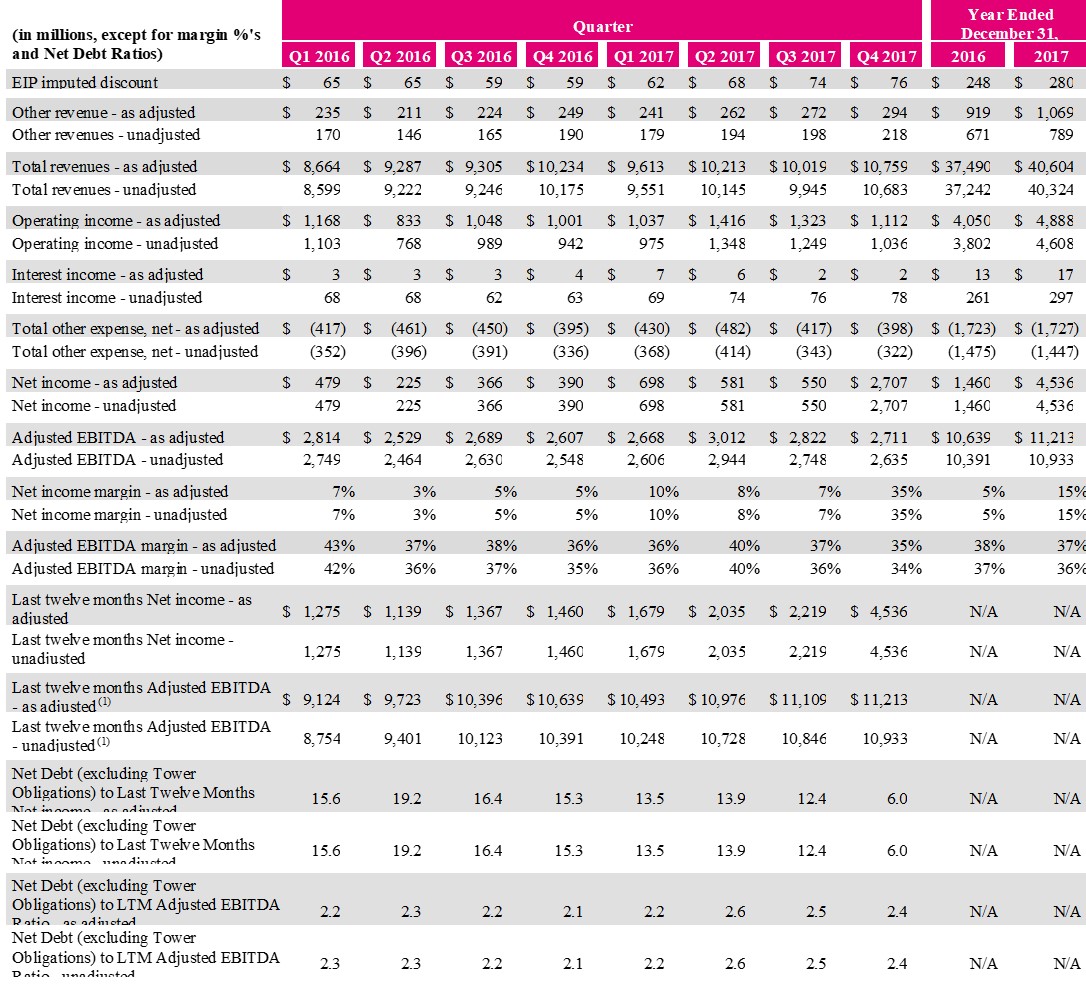 (1) For purposes of Last twelve months Adjusted EBITDA, prior quarterly adjustments were as follows:

Adjusted EBITDA is reconciled to net income as follows: